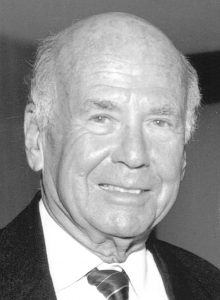 A Life of Achieving and Giving

It has been said, "It's not what happens in your life, it's what you do with what happens in your life." What Jerry Oppenheimer has done with his life was a model of how both to live and give. His life included a remarkably diverse career of accomplishments balanced by a lifelong commitment to helping others. Gravitating from military pilot to aviation company boss to banker, entrepreneur, and inventor-successful experiences all - Jerry never lost sight of the rewards of helping others. Jerry was a compassionate person with a love of family and friends paired with endless curiosity. Just some of Jerry's philanthropic efforts have included:

Pilot instructors were in demand with the start of World War II and Jerry joined the Army Air Force Training Command as a civilian flight instructor at Thunderbird Field in Glendale, Arizona. Two years later, he was a Warrant Officer testing and ferrying largely single engine planes for the Air Transport Command. When the war ended, he joined the active Air Force Reserve as a First Lieutenant.

He moved to Kansas City after the war to manage an automobile parts wholesale company. Jerry was then recalled to service in the Korean War, flying F84 jets for the Strategic Air Command. He was sent to England with the 12th Fighter Wing and flew training missions over Europe and Asia. He subsequently was assigned as a pilot replacement to Japan and then was sent to Korea. Jerry flew a total of 21 combat missions. After the Korean War, his business acumen led to successful endeavors in the banking, automotive and high technology worlds.

Jerry began actively supporting nonprofit projects and organizations in the early 1980s. After the death of his stepfather and mother Jules Stein and Doris Stein, Jerry took an active role in promoting their legacy at UCLA. He helped in building both the Doris Stein Research Center and the Edie and Lew Wasserman building at UCLA and computerized the Student Affairs Office at the UCLA School of Medicine.

Jerry has served on many boards in his lifetime, including the Stein Eye Institute, Veteran's Park Conservancy, Hollywood Canteen Foundation, Gerald Oppenheimer Foundation, UCLA Center for Longevity, and the UCLA David Geffen School of Medicine.

With his years of selfless service to our country and the health of our communities, Jerry Oppenheimer made us all proud to know such a gentleman.

Jerry is survived by his wife Gail, his sons Bill and Mark, stepchildren Britt, Pablo and Alyce, along with 10 grandchildren, and 13 great-grandchildren, and 1 great-great grandchild. Through the years, he would take the family on trips and he would interview each child about their activities and goals. Jerry told them how important it was to share their success by giving back to others.