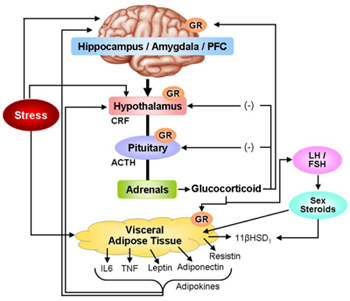 Aim A. To conduct comprehensive genetic, molecular and functional phenotyping of HPA axis in male and female patients with IBS, with IC/PBS and healthy controls (HCs).

Aim B. To establish that perinatal stress alters the pattern of regional brain CRF and CRF-R1 expression, and DNA methylation of GR promoter region in male and female rats.

Aim C. To evaluate increased engagement of central stress responsiveness/arousal circuits in the perinatal stress model. Emphasis is on identifying homologies of these mechanisms between rodent and human brain (Project 3).

Aim B. Characterize the role of visceral fat products in stress-induced changes in the HPA axis and brain structural and functional changes in male and female rodents.

Aim C. Apply advanced mathematical modeling techniques to identify patient subgroups from endophenotypes identified in Aims A and B. 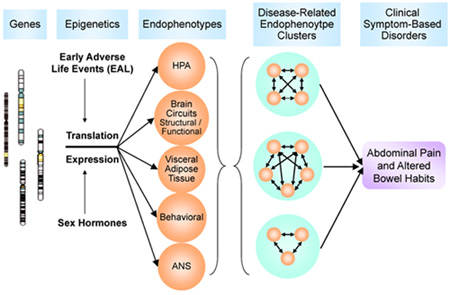