History and Purpose of UCLA SCOR

A large number of frequently overlapping chronic functional pain syndromes, including irritable bowel syndrome (IBS), interstitial cystitis/painful bladder syndrome (IC/PBS), fibromyalgia, migraine, as well as common affective disorders such as anxiety and depression, occur with a higher prevalence in women. However, despite these well known epidemiological facts, little is known about the reasons for this gender bias; nor are the reasons known for a significantly greater prevalence in women of a whole range of stress-sensitive, frequently co-occurring affective and functional disorders.3, 4 The majority of physicians seeing these patients have frequently blamed the greater prevalence on excessive health care seeking behavior by women, and on psychological factors.

Since its initial funding through a SCOR grant in 2002, the UCLA Center for Neurovisceral Sciences and Women’s Health (CNS/WH) has pursued the general hypothesis that many of these functional disorders, including IBS and IC/PBS are related to alterations in the stress responsiveness of affected individuals, and that the greater prevalence in women is related to sex-related differences in the way the nervous system responds to physical or psychological perturbations of homeostasis. Results generated during the past 2 funding periods of this grant have largely confirmed the main hypotheses proposed in the initial proposal, demonstrating sex-related differences in the brain response, as well as in emotional, perceptual, autonomic and neuroendocrine responses to psychological and physical stressors in healthy individuals and in affected patients. 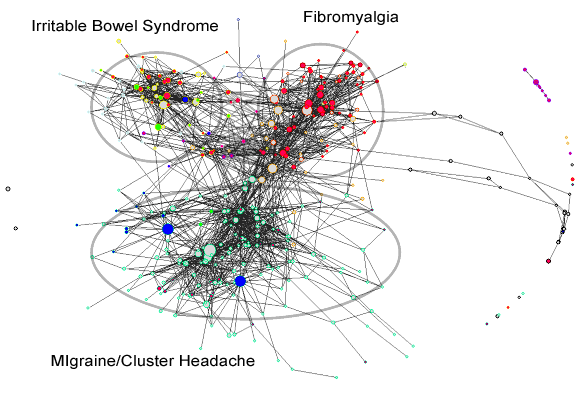 Consistent with the goals of the Strategic Plan of the Office of Research on Women’s Health (A Vision for 2020 for Women’s Health Research), the overall goal of the UCLA SCOR is to characterize sex related differences in the bidirectional interactions between the brain, the gut and its microbiome, and to demonstrate implications of these findings in the pathophysiology of irritable bowel syndrome (IBS). 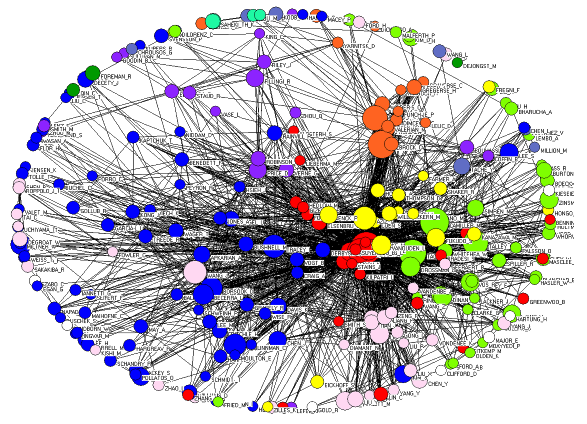 Within the field of visceral pain neuroimaging, UCLA CNS researchers are the central-most hub (red cluster). The figure depicts an author citation map of authors contributing at least 15 works regarding visceral pain neuroimaging findings. The size of the circles represent number of works contributed. The lines represent citations between authors.

The UCLA SCOR has proposed a unique translational and interdisciplinary approach to achieve this goal, ranging from molecular studies to multimodal brain imaging techniques in humans and rodent models. The long term goal of the proposed studies is to identify subgroups of IBS patients which may respond differentially to different therapies. To identify these subgroups we are using a unique data driven approach, by first characterizing a number of disease relevant endophenotypes in 120 patients (Project 1, Aim A), and then applying machine vector learning approaches to identify biological subgroups based on endophenotype clusters (Project 3). We are also performing molecular brain imaging studies in an IBS rodent model, and identify homologous brain changes to those identified in Project 3. In Project 2, we are studying the effects of altered HPA axis regulation in several rodent models on visceral fat, and explore the possible role of adipocyte signaling to the brain in creating structural and functional brain changes. The use of both preclinical and clinical approaches within the same Project, and the collaboration of several preclinical and clinical research groups with each other has created a unique opportunity for translational research. 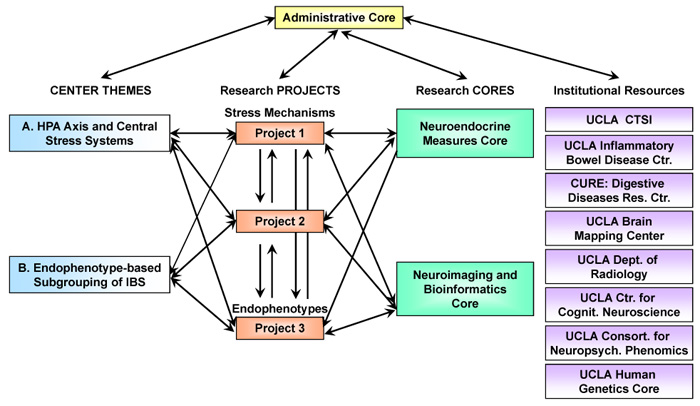