In all listed presentation, there was an emphasis on sex related differences in brain gut interactions, a major theme of the UCLA SCOR 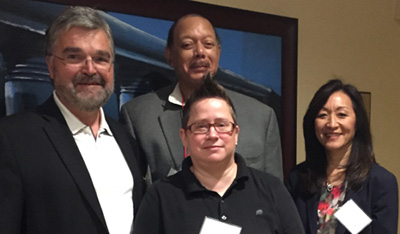 Invited speaker, The Challenge of Chronic Pain, Wellcome Trust Genome Campus: Brain Signatures of Chronic Visceral Pain – does the gut microbiome have anything to do with them? Cambridge, UK March 11-13, 2015

Invited speaker, Probiota Americas: Microbiota and its Impact on the Gut-Brain Axis – How Much Do We Know? San Diego, June 3-5, 2015.

Chang, L. Genetics and IBS: Is there a Pattern to the Puzzle? Digestive Diseases Week, Chicago, IL, May 5. 2014.

Mayer, EA. Influence of Gut Microbiota on the CNS. Annual meeting of the German Society for Digestive Disorders (DGVS Spring Conference), Berlin, May 23-24, 2014.

Mayer, EA. Do gut microbiota talk to the brain? Preclinical and clinical evidence. Microbiome Connections to the Environment, Health and Disease, Institute for Genomics and Bioinformatics, UC Irvine, Sept. 19, 2014.

Mayer, EA. Invited Speaker, SIG Symposium on Vulnerability to Pain: sources of female-male differences and the challenge of understanding them: “Sex differences in chronic visceral pain patients – how much is in the brain?” Milan, August 26, 2012